According to the stars: grappling with giving graded reviews

I created a GoodReads profile a few weeks back. I thought it would complement the blog nicely. Moments later however, I tweeted this:

So I started a GoodReads account. Now I’m remembering why I didn’t have one in the first place: starred reviews. #hindikokaya

Maybe I found it daunting because I was looking at it from a very scholastic standpoint, as if I were being asked to grade students’ creative writing papers, which will require me to consider a lot more factors of significance. But starred reviews are completely different in the sense that these are not works-in-progress, and the rating is not given out for the sake of the creator, but as a guide to those seeking clues about whether a completed work is worth one’s time.

A back-and-forth eventually ensued among friends about how to go about these things. A friend offered sympathies, saying that he also had to constantly remind himself that this is not about passing judgment upon the work itself, but more about expressing one’s personal appreciation of the work. I agree, and thinking about it in that way does make things a bit easier. Until another friend mentioned the challenge of rating works in a time-vacuum. One has to refrain from changing the rating of a previously-reviewed work, in consideration of the rating one is giving to the work being currently reviewed. The key, it seems, is to rate works in realtime, to more accurately represent how a work has affected one’s self; one cannot rate based on memory.

Another question I had was: do I adjust my standards according to genre? Thankfully, I made the right decision to turn to Roger Ebert, the late great film critic, for advice. This was particularly helpful and quite comforting:

In connection with my affinity for genres, in the early days of my career I said I rated a movie according to its “generic expectations,” whatever that meant. It might translate like this: “The star ratings are relative, not absolute. If a director is clearly trying to make a particular kind of movie, and his audiences are looking for a particular kind of movie, part of my job is judging how close he came to achieving his purpose.” Of course that doesn’t necessarily mean I’d give four stars to the best possible chainsaw movie. In my mind, four stars and, for that matter, one star, are absolute, not relative. They move outside “generic expectations” and triumph or fail on their own.

In the end, it will go back to my quantitative interpretation of how my perception of a book’s relevance relates to the probability of me recommending the book to other readers. And as it is a largely personal and subjective process, I will be thinking of those readers in terms of my friends. I  have thus figured out a guide, for myself, to use for these starred reviews: 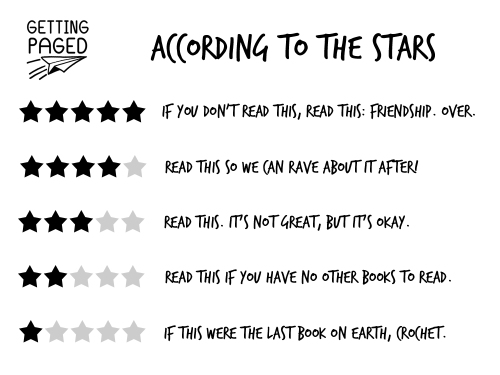 I just cannot think about it the way GoodReads suggested: didn’t like it, it was okay, liked it, really liked it, it was amazing. I have a clear idea about those first three ratings, but the last two can mean the same things sometimes. And maybe I’m just mean, but “I didn’t like it” is not a bad-enough rating for some books. Let’s admit it, some things are just unforgivable. If a novel has proper grammar and spelling and its plot basically holds up, but the story is just uninteresting or clichéd, then it’s merely an unfortunate example of the form. However, if a work of fiction has poor technical writing and/or major plot holes, then it fails its form completely. And I would like the opportunity to wag my finger at the publisher, even though no one will really see it.